Pierre Gallant, Dianne VanDommelen, and Jeff VanDommelen, of Architects Four Ltd. of Moncton, N.B., were honoured by Lt.-Gov. Herménégilde Chiasson, as the first recipients of the Lieutenant Governor’s Award of Excellence in Architecture. The architects won the award for their design of the Greater Moncton Airport Terminal.

The first to DFS Inc. of Saint John for the Cox Electronics and Communications Retail Store, Saint John.

“Although architecture can say a lot about society and trends, buildings like the Moncton airport, also have to serve their intended purposes”, said Dianne VanDommelen.

“It was our goal to develop a building that would be user-friendly, create an environment of calmness, clarity and transparency of the building. And for these we have received positive feedback from users.”

Stanis Smith, Vice-President, Architecture and Interior Design, Stantec Architecture Ltd. said, “Airport terminals are the front door to their region, and have the opportunity to create a memorable first and last impression for visitors and residents alike. Stantec Architecture is delighted that the Airport Terminal has been recognized with this design award, and in so doing has become an ambassador for the city and community.”

Lt.-Gov. Herménégilde Chiasson’s remarks suggest that the architects hit the mark, “The new terminal building is a symbol of progress, without forgetting the past. It stands for strength, success, and new frontiers, just as it is welcoming, comforting and comfortable.”

Independent jurists found the airport terminal to be “esthetically pleasing, challenging and yet in keeping with the philosophies of good architecture.”

Gala_Reception_-_March_18_2005_014-rs_smallRenowned for his work in glass, wood, metal, and clay, internationally acclaimed New Brunswick artisan Peter Powning was commissioned to create the award which will be on permanent display at Old Government House in Fredericton.

“The Lieutenant Governor’s Award of Excellence in Architecture will be presented regularly – perhaps every two or three years, when the number of significant projects merits it,” said Ed Goguen, outgoing President of the Architects’ Association of New Brunswick. The new Association President, Gaye Kapkin says, “the award is a way to recognize good work and will be a useful tool to raise public interest in the role architects play in their lives.”

As part of the ceremony, the Association also presented Lt.-Gov. Chiasson with an Honorary Lifetime Membership designation – a first for the Association since its’ establishment in 1933. In addition, the Association created the Herménégilde Chiasson Award, which was presented to Barbara Nicholson, Director of Design and Construction Services with the Department of Supply and Services, for her work in developing the new Award, exemplary service to the Association and advocacy of the profession. 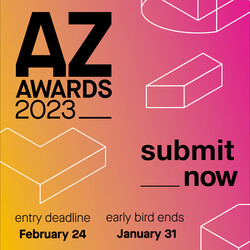